Symptoms and Treatment For Obsessive-Compulsive Disorder 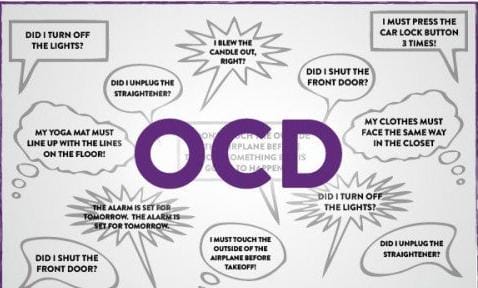 Obsessive-compulsive disorder (OCD) features a pattern of unreasonable thoughts and fears (obsessions) that lead you to try to repetitive behaviors (compulsions). These obsessions and compulsions interfere with daily activities and cause significant distress.

You may attempt to ignore or stop your obsessions, but that only increases your distress and anxiety. Ultimately, you are feeling driven to perform compulsive acts to undertake to ease your stress. Despite efforts to ignore or get obviate bothersome thoughts or urges, they keep returning. This results in more ritualistic behavior — the vicious circle of OCD.

OCD often centers around certain themes — for instance, a fear of getting contaminated by germs. To ease your contamination fears, you’ll compulsively wash your hands until they’re sore and chapped.

If you’ve got OCD, you’ll be ashamed and embarrassed about the condition, but treatment is often effective. Here are the symptoms and treatment methods that you can use to keep this disorder of yours in control:

OCD obsessions are repeated, persistent and unwanted thoughts urge or images that are intrusive and cause distress or anxiety. you would possibly attempt to ignore them or get obviate them by performing a compulsive behavior or ritual. These obsessions typically intrude when you’re trying to consider or do other things.

Obsessions often have themes to them, such as:

Examples of obsession signs and symptoms include:

You may structure rules or rituals to follow that help control your anxiety when you’re having obsessive thoughts. These compulsions are excessive and sometimes aren’t realistically associated with the matter they’re intended to repair.

As with obsessions, compulsions typically have themes, such as:

Examples of compulsion signs and symptoms include:

OCD usually begins within the teen or young adult years. Symptoms usually begin gradually and have a tendency to vary in severity throughout life. Symptoms generally worsen once you experience greater stress. OCD, usually considered a lifelong disorder, can have mild to moderate symptoms or be so severe and time-consuming that it becomes disabling.

When To Consult a Doctor

There’s a difference between being a perfectionist — someone who requires flawless results or performance, for instance — and having OCD. OCD thoughts aren’t simply excessive worries about real problems in your life or wish to have things clean or arranged in a specific way.

If your obsessions and compulsions are affecting your quality of life, see your doctor or psychological state professional.
Causes
The explanation for the obsessive-compulsive disorder isn’t fully understood. Main theories include:

Exposure and response prevention, which needs repeated exposure to the source of your obsession, as explained above.
Cognitive therapy, which focuses on the catastrophic thoughts and exaggerated sense of responsibility you are feeling an enormous part of cognitive therapy for OCD is teaching you healthy and effective ways of responding to obsessive thoughts, without resorting to compulsive behavior.
Other OCD treatments
In addition to cognitive-behavioral therapy, the subsequent treatments also are used for OCD:

Medication. Antidepressants are sometimes utilized in conjunction with therapy for the treatment of obsessive-compulsive disorder. However, medication alone is never effective in relieving the symptoms.

Family Therapy. Since OCD often causes problems in family life and social adjustment, group therapy can help promote understanding of the disorder and reduce family conflicts. It also can motivate relations and teach them the way to help their beloved with OCD.

Group Therapy. Through interaction with fellow OCD sufferers, group psychotherapy provides support and encouragement and reduces feelings of isolation.
How to help someone with OCD
The way you react to your loved one’s OCD symptoms can have an enormous impact on their outlook and recovery. Negative comments or criticism can make OCD worse, while a relaxed, supportive environment can help improve the result of treatment.

Don’t scold someone with OCD or tell them to prevent performing rituals. They can’t comply, and therefore the pressure to prevent will only make the behaviors worse.

Be as kind and patient as possible. Each sufferer must overcome problems at their own pace. Praise any successful plan to resist OCD, and focus attention on positive elements within the person’s life.

Find humor. Laughing together over the funny side and absurdity of some OCD symptoms can help your beloved become more detached from the disorder. Just confirm your beloved feels respected and in on the joke.

Don’t let OCD take over family life. Sit down as a family and choose how you’ll work together to tackle your loved one’s symptoms. attempt to keep family life as normal as possible and therefore the home a low-stress environment.
Prevention
There are no sure ways of preventing obsessive-compulsive disorder. However, getting treatment as soon as possible may help prevent OCD from worsening and disrupting activities and your daily routine.