Depression: What are the symptoms and types? 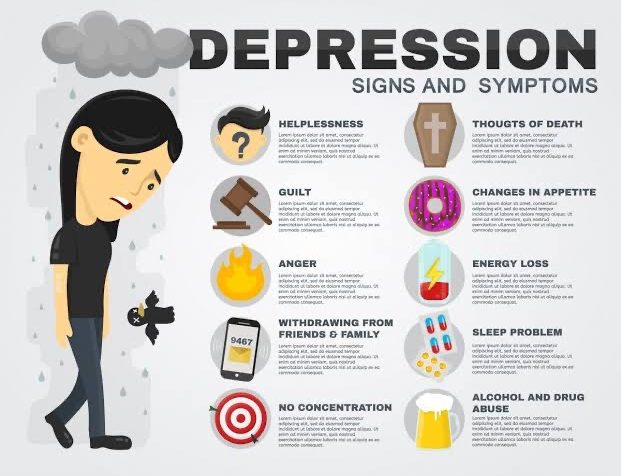 Want to know about the different types of depression & it’s symptoms??

Ever thought about what are the types of depression & it’s symptoms and how can you identify them in humans??

A group of conditions associated with the elevation or lowering of a person’s mood, such as depression or bipolar disorder.

Depression may become a serious disorder particularly if it is long-lasting and mild to extreme.

It can lead to considerable distress and low functioning on the job, at school, and in the home. Depression can lead to suicide at its worst.

Per year, almost 800 000 individuals die from suicide. In 15-29-year-olds, suicide is the second leading cause of death.

Read on to learn about some of the more common types of depression.

Some Key Facts about Depression:

A depression episode may be graded as mild, moderate, or extreme based on the amount and severity of the symptoms. The following includes seven of the most prominent forms of depression.

Most people at some point in their life feel depressed or low. Clinical depression, however, is characterized by a depressive mood most of the day, often particularly in the morning, and a lack of interest in daily activities and relationships—symptoms that have been present every day for at least 2 weeks.

In comparison, according to the DSM-5—a textbook used to diagnose mental wellbeing conditions—you may have other effects of severe depression.

The major depressive disorder tends to be more prevalent in women and those between the ages of 18 and 25.

MDD is however treated with medications and psychotherapy. Any lifestyle changes can also help to relieve those symptoms.

People who have serious MDDs or who have thoughts of hurting themselves may need to remain in the hospital during recovery. Some will also continue to take part in an outpatient recovery program before conditions change.

Selective serotonin reuptake inhibitors (SSRIs) are a commonly used form of antidepressant.SSRIs include well-known drugs such as fluoxetine (Prozac) and citalopram (Celexa).

Tricyclic antidepressants and medications known as atypical antidepressants, such as bupropion (Wellbutrin), may be used when other drugs haven’t helped.

Psychotherapy can help you adjust to a crisis or other stressful event. It can also help you replace negative beliefs and behaviors with positive, healthy ones.

A recent update to the Diagnostic and Statistical Manual of Mental Disorders, Fifth Edition (DSM-5) is a consolidation of two previous diagnoses: chronic major depressive episode and dysthymic disorder, the standard reference manual used for the diagnosis of known mental conditions in the United States.

Symptoms of chronic depressive disorder, while not as severe as those of major depression, also require the involvement of two (or more) of the following:

Individuals with the persistent depressive disorder frequently have a pessimistic outlook about themselves, their future, those around them, and events in general life.

Bipolar disorder is a mental health disease that induces frequent mood swings that have emotional spikes (mania or hypomania) and lows, previously referred to as bipolar depression (depression).

You can feel miserable or desperate and lose enthusiasm or enjoyment in most things as you become depressed. You can feel euphoric, full of energy, or unusually irritable when the mood changes to mania or hypomania (less serious than mania).

Sleep, motivation, activity, judgment, actions, and the capacity to think objectively may be influenced by these mood swings.

There are high moods in hypomania and mania. More intense than hypomania, Mania is.

Treatment helps to stabilize the mood of the client and decrease the severity of symptoms. The aim is to allow the person to work efficiently in everyday life.

A combination of treatments requires therapy, including:

Bipolar II disorder (pronounced “bipolar two”) is a form of mental illness. With moods cycling from high and low over time, bipolar II is equivalent to bipolar I disorder.

The elevated mood will manifest as either euphoria (feeling “high”) or as irritability during a hypomanic episode.

During hypomanic episodes, signs include:

An individual with hypomania can feel good and perform well, but others may find that their acts are abnormal. There is a possibility that a depressive disorder will follow despite feeling healthy. A depressive episode’s symptoms can include:

A mixture of medicine and psychotherapy typically includes treatment for bipolar II disorder.

Typically, it is long-lasting and continuing. When a person stops medication, symptoms will return, including though they feel well.

Postpartum depression (PPD) is a dynamic combination of changes in physical, mental, and behavioral changes that arise after giving birth in certain people.

PPD is a type of major depression that occurs within 4 weeks after delivery, according to DSM-5, a textbook used to diagnose psychiatric disorders.

The diagnosis of postpartum depression is based on the severity of the depression, not just on the period between conception and onset.

Postpartum depression symptoms range from person to person and also from day-to-day.

Chances are you’re familiar with some of these measures if you have postpartum depression:

You can visit the doctor as soon as possible if you have signs of postpartum depression so that you can begin recovery.

For postpartum depression, there are two primary treatments: medicine and rehabilitation. Either one may be used alone, but when used together, they can be more effective. In your everyday life, it’s also important to make some healthier decisions.

You do not want to take more stress than you can deal with. Instinctively, people will not know what you need, so it’s necessary to remind them. Take some “me time,” just don’t get yourself separated. For new moms, try forming a community group.

Alcohol is a depressant, so you need to stay away from it. Offer your body every chance to recover, instead. Feed a well-balanced diet and have some regular exercise, even though it’s just a neighborhood stroll.

For all, depression is not the same and even the symptoms differ from person to person. It ranges from a minor illness to a more severe one. With both forms of care, there is a treatment and, in most cases, the treatment shows good outcomes.

The outcome is very positive for suicidal persons who undergo help. You will take control of your life by working with a trained and knowledgeable mental health care provider.